ICC- International Certificate of Competency  from the Irish Maritime Administration allows you to control not only sailing but also motorized vessels.

The ICC certificate is confirming that an individual is competent to the level required to meet the United Nations Economic Commission for Europe Inland Water Committee (UNECE IWC) Resolution 40.

International Certificate of Competency ICC is the level of competency required when chartering a boat in the European countries  (Baltic Sea, Mediterranean Sea etc).

You can`t use ICC instead of skipper license. International Certificate of competence ICC just confirms your qualification for international sailing.

How to get ICC with Yacht Challenge?

If you have certificates: Bareboat Skipper IYT or up and  Radiooperator VHF you just pass theoretical and practical tests ICC.

If you don`t have any IYT certificates, we teach you course Bareboat Skipper IYT or up and Radiooperator VHF and you get certificate ICC together with other certificates .

In accordance with UNECE Resolution 40 (Revision 4), citizens and residents of countries  from the list  below, that are signatories to Resolution 40, will be obliged to obtain an ICC from their own national issuing authority and not from IYT, with the exception of the United Kingdom and Latvia and if the applicant can provide proof of residency* in a country not on this list. *Proof of residency (examples) Utility bill (electric or gas), Property tax bill, Telephone bill, Insurance bill.

As of May 2016 the following countries have adopted resolution 40.

***IYT has been authorised to issue ICC’s to United Kingdom Nationals and Residents for the past 18 years which are issued on behalf of the British Maritime & Coastguard Agency (MCA). Reference: UNECE Resolution 40 document

The certificate ICC is valid for a period of five years, then it is necessary revalidate it.

Entry Standard for the International Certificate of Competency ICC 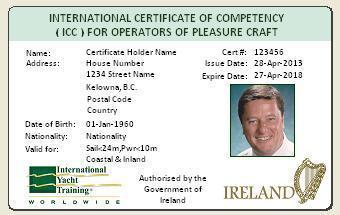 The price includes: accommodation in the cabin, the services of the captain-instructor, all the necessary textbooks and manuals, bed linen.

Paid additionally: meals on the yacht, including meals for the captain-instructor, IYT certificates with shipping from Canada – €175, fuel, €30 insurance, €30  fuel

We develop the rest on yachts with the best route in any water area. A responsible, attentive, benevolent and competent captains instructor who is familiar with the yachts will not be hearsay. We know everything about sailing and yachting, or almost everything, and are going to share the accumulated information with you. We hope that you will appreciate our efforts for dignity, and training in the “Yacht-Challenge” will bring you joy and 100% result. Support for graduates after graduation.

FOR YACHT School WE HAVE A HIGHEST QUALIFICATION